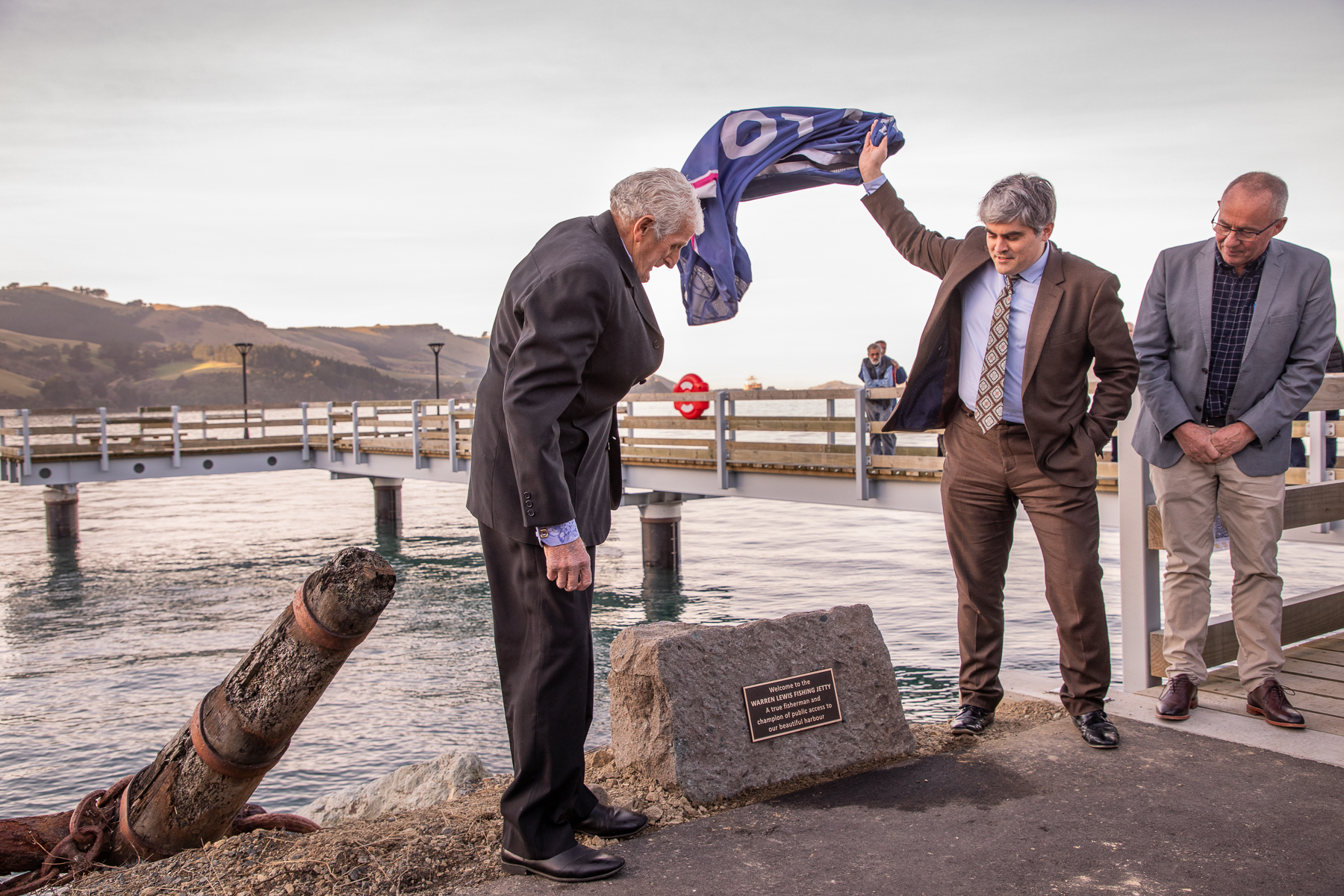 This afternoon, Dunedin Mayor Aaron Hawkins unveiled the name plaque during a ceremony on the jetty itself.

Avid fisherman Warren is a long-time advocate for community access to the Otago Harbour and was a key driver behind the jetty's construction in 2019. He was on the Port Environment Committee for 21 years and lobbied hard for a community fishing jetty.

Port Otago Chair Paul Rea spoke today and said the company always intended naming the structure something more exciting than the Boiler Point Fishing Jetty, once the project – which included the walkway upgrade and new public toilets – was complete. "We turned our minds to naming the jetty and, when you looked back on the history of the project, Warren's name keep coming up as the person who hounded Port Otago through direct engagement, the consent processes and via the Port Environment Committee. He just didn't let up! In discussion with community leaders, Iwi and our board, there was universal support for our choice. We are proud to be naming the structure the Warren Lewis Fishing Jetty." 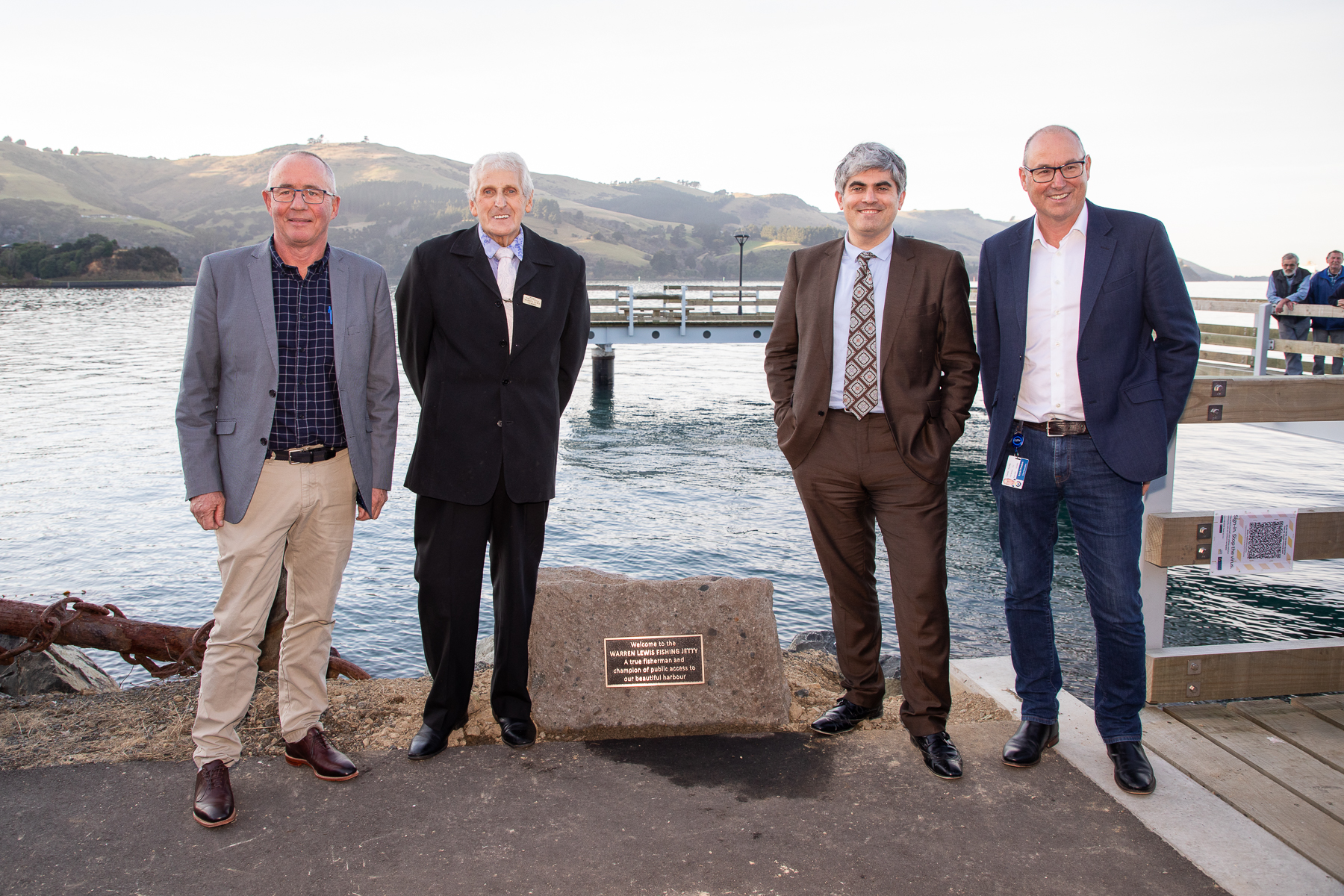 We spoke to Warren in the lead up to today, and asked what drove him to pursue the concept of a jetty. "As kids, we were wharf brats. We grew up exploring under the wharves, over the wharves and between the wharves. There'd be 15 to 20 of us sometimes. All our parents were associated with the wharf, as fishermen or ship builders."

He says understandable progress means today's children in the area would never enjoy those experiences and that was his motivation to see a fishing jetty built.

At the time the jetty was opened in 2019, Warren described it as absolutely magnificent. "It would be the most utilised amenity on the whole of the Otago Harbour. It's just brilliant watching kids with their Warehouse rods fully bent, with massive smiles on their faces. In fact, for me, watching their delight is even better than the fishing." 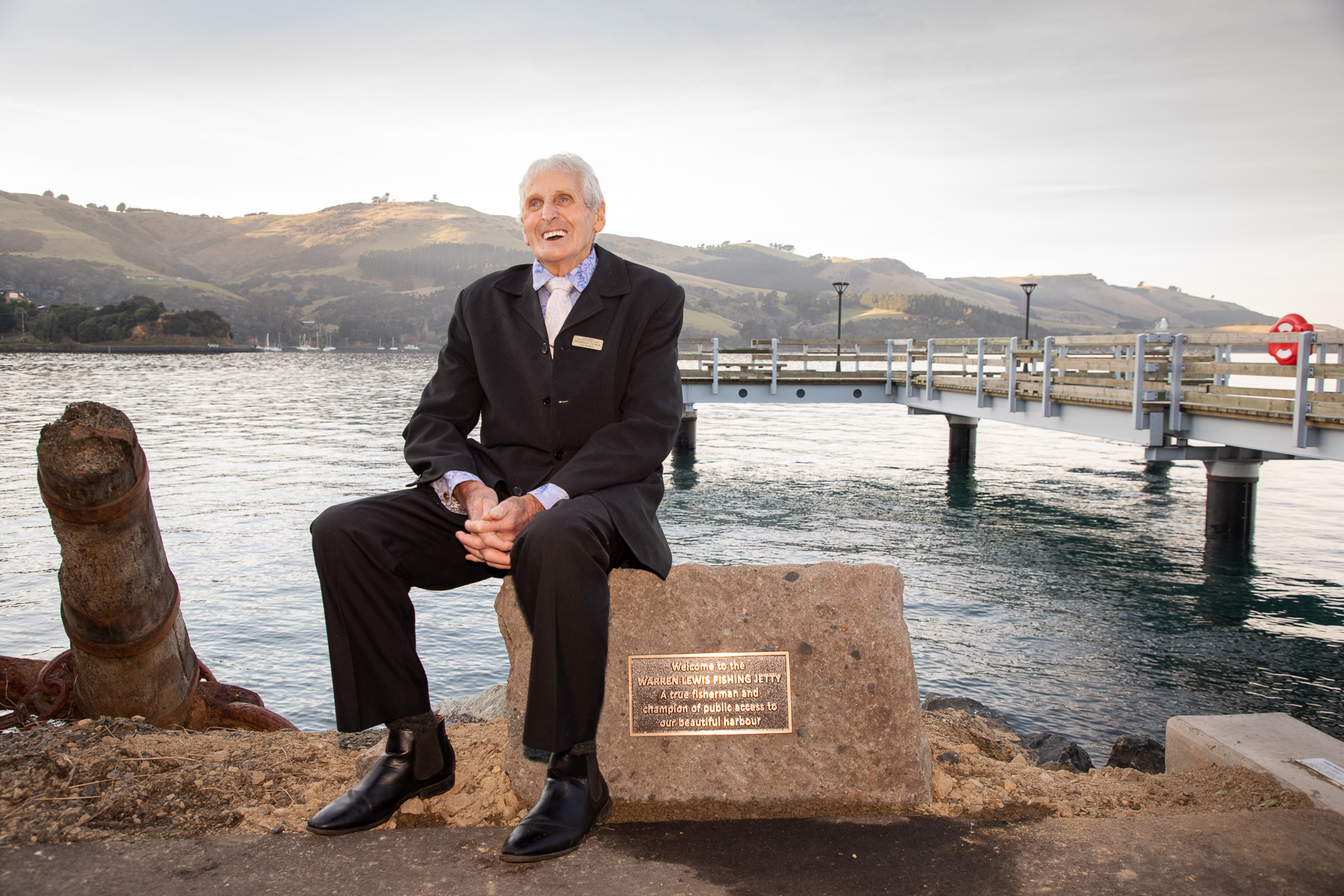 His other great passion is Marine Search and Rescue. Warren was last year awarded his 40-year service certificate and has been involved in rescues and recoveries. 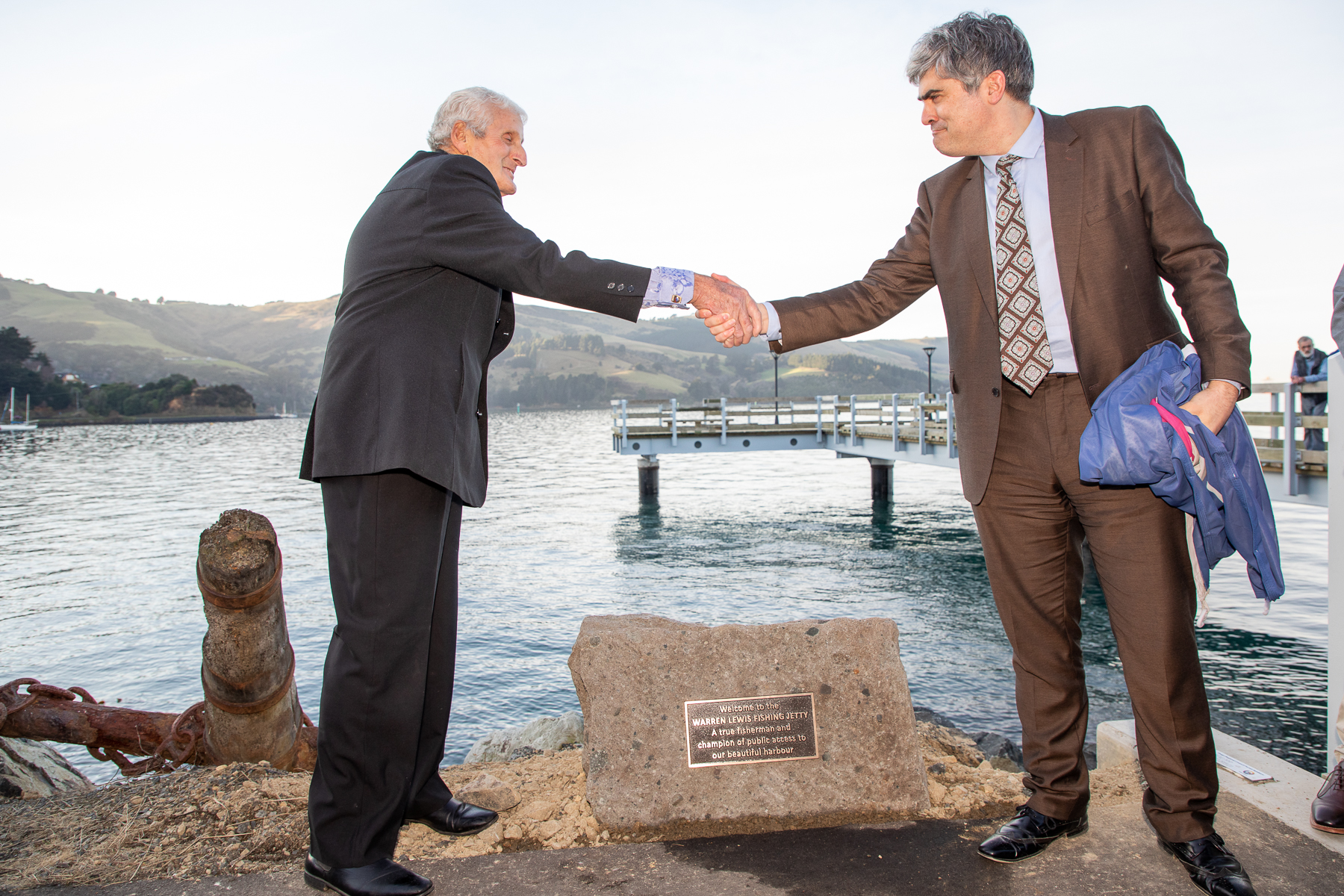 He was a lad of 13, when he carried out his first marine rescue. A four-year-old relative was walking backwards down the Carey's Bay Wharf and fell into the water. "He was disappearing out of sight. We had to shake, rattle and roll him, when we got him out."

About 15 years ago, Warren had one of his most memorable rescues. "A friend and I were out in the boat and we got a call from the signal station at Tairoa Heads. A very fat albatross chick had attempted to fly, but instead plummeted into the sea. We found this big white blob and spent 30 minutes trying to grab it. He kept flapping off. We ended up using a boat hook to secure it. Once we got it on the boat, the thing kept snapping at us, so we wound insulation tape around its beak. Then we had to deal with the two-metre wingspan, so we wound some more tape around his body to keep the wings from flapping." The fishermen met a DOC officer at Wellers Rock and handed over the bundle of feathers and tape. They later received a DOC citation for their rescue.

Unfortunately, Warren found himself on the wrong end of the search and rescue equation in 2016, when his boat, the Renegade, experienced an on-board explosion. He was winched to safety by the Otago Rescue Helicopter – an experience he describes as terrifying. 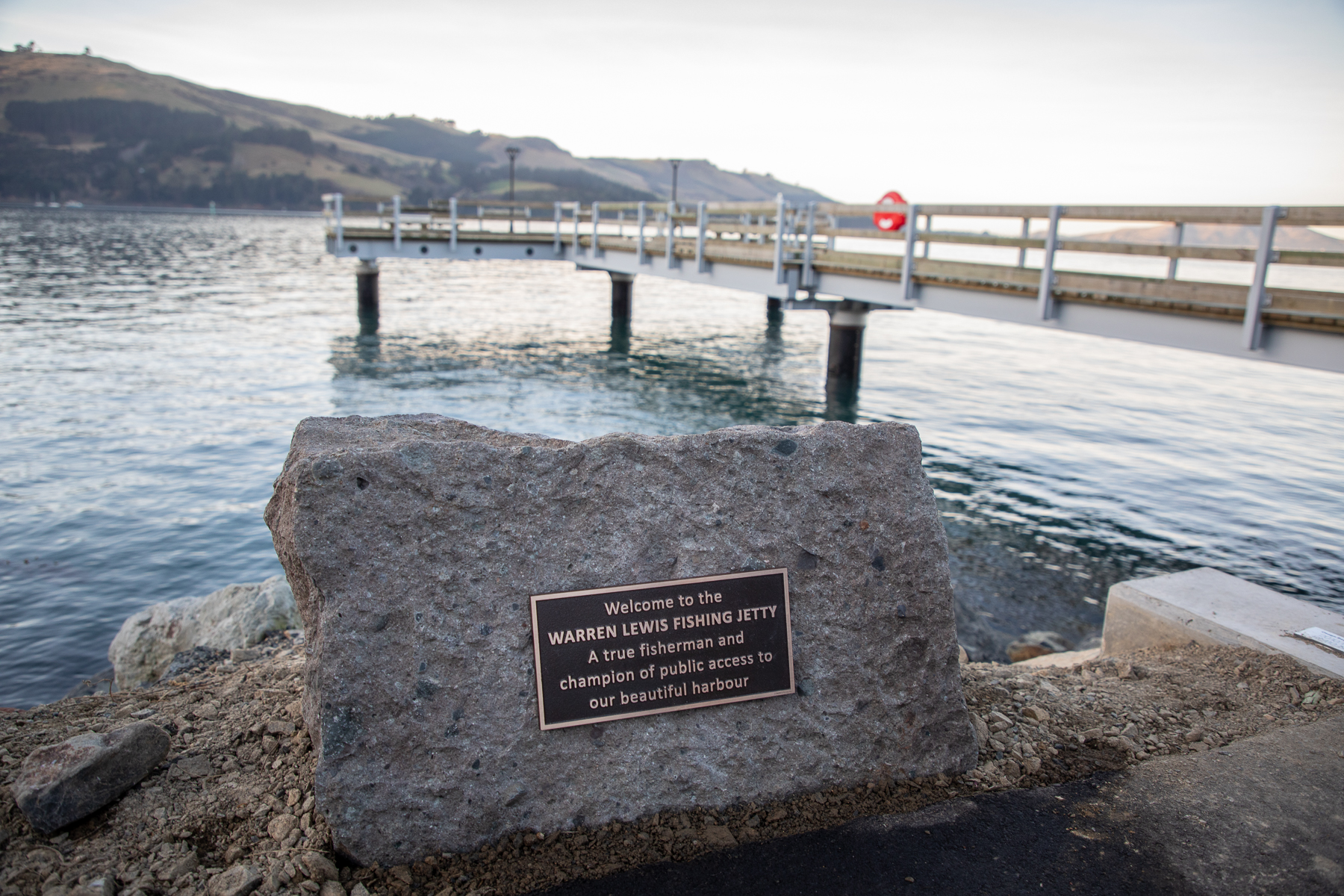 With his sporting hat on, Warren's gig was big game fishing and he holds the world record for his catch of a 100-plus kilogram Thresher shark caught on a 6kg line. Within New Zealand, he picked up 69 national fishing titles during his long fishing career. Warren is also an excellent shot, representing New Zealand in clay target, skeet and trap shooting.

Warren is fifth – possibly sixth – generation Port Chalmers. His family settled in the township in 1865 and are one of the oldest fishing families. Warren was given his first boat, The Bimbo, when he was five and was merrily fishing along by age six.

Brian Benn
Southern District Police Search and Rescue Coordinator
Brian has worked alongside Warren for more than 30 years. "He always seems to be in the right place at the right time – and many rescued people are grateful for that."
"From my perspective as coordinator, Warren is a very good forward commander, because he has so much experience and knowledge of the area. He intuitively knows the capability of people and their boats, and the whole of coastline and marine environment. He therefore knows exactly which boat to task with a particular job."
"Warren has put so much of his personal time into saving lives in the community – and many of those individuals will not even be aware of the hand he had in their rescue."
Brian says Warren stands up for what he believes is right. "He's an unapologetic outspoken critic of dumb decisions."

Rowan Leck
Fellow search and rescue volunteer and long-time friend
When asked to describe Warren, Rowan replied: "He's pig-headed. When he wants something and thinks he's right, he'll stick with it. It takes a lot to change his mind."
Conversely, Rowan says his friend does not hold a grudge. "You can have a discussion with Warren and agree to disagree – and go away and still be friends. That's great quality."
During a harbour search and rescue incident debrief, someone asked why Warren wasn't called. "Warren mumbled about his harbour knowledge and calmly said 'I not only know where every fish is in the harbour, I know them all by name'."

Mark Geytenbeek
Fisheries New Zealand Senior Analyst and former South East Recreational Fishing Forum facilitator
"Warren comes from the Port Chalmers Lewis family – a real fishing dynasty. His family trawled with sailing boats in the harbour – that's how far back they go. Warren is very passionate about local fisheries and was a consistent voice for the Otago area. He was valued on the forum for his good grasp of quota management system – however he didn't always agree with it! – and balancing that with the practical considerations of how recreational fishers fished."
"Warren has a galvanising personality and was often controversial within the forum. He'd give me a rark up, when he felt I needed one. Given his spirit, I appreciate that he generally preferred to work with us, than against us."