The Port Otago Group today announced a half-year profit of $7.0 million for the six months ended 31 December 2019. The result is 16% down on the comparable period of the 2018/19 financial year.

Port Otago Chairman Paul Rea said the result is solid, given the cold wet December quarter experienced across many parts of Otago and Southland. “This impacted on export milk and meat production, which flowed on to have a direct impact on port operations. There was simply less export product to be shipped.”

“So, while total revenue was 2% higher due to increased sales of property inventories, revenue from marine and cargo services reflected those lower export volumes.”

Total container throughput for the period was 89,000TEU (Twenty-foot Equivalent Units) – down 4% on the same period last year. Full export chilled/frozen container volumes were up 10%, but offset by a 5% reduction in export dry containers, which generally contain dried milk powder and timber products.

“However, volume was a relatively pleasing result, given the significant fall in export log pricing in the early part of the season,” Mr Rea said.

Overall, the group EBITDA was $16.3 million, compared to $17.3 million for the previous comparable period. Shareholder equity increased to $515 million from $508 million at June 2019. The group’s equity ratio is a healthy 81%, with bank debt at $83 million – $8 million lower than the same time last year.

Looking forward, Mr Rea said the company remained focused on understanding critical risks and developing improved mitigations to keep people safe. “Good progress has been made in the first half of the year, with hard concrete barriers installed at the Port Chalmers container depot and improvements around the truck exchange area that remove the risk of man and machinery meeting.”

“Behind the scenes, our TimeTarget rostering system continues to be developed. It is being introduced to improve visibility of rosters for staff and to manage fatigue.”

Port Otago Group directors declared an increased interim dividend of $4.5 million – up from $3.6 million last year. The dividend reflects the board’s confidence that future property earnings are expected to buffer the impact of forecast lower earnings from port operations. 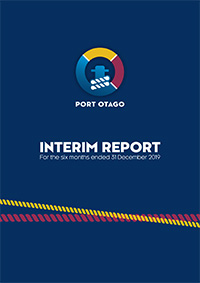